What if the economic situation is positive or negative?

What happens with your pension in the event of long-term economic growth or if there is a downturn?

The estimate of your pension at PDN on your UPS shows you the effects of any future economic growth or downturns. This is presented in an image with three arrows that start together from one point. The bottommost amount is not an estimate. This is the pension you have accrued so far at PDN. The top three amounts are an estimate of the pension you are likely to receive depending on various situations.

You see the estimate of your pension with three arrows that start together from one point. An example is given below. 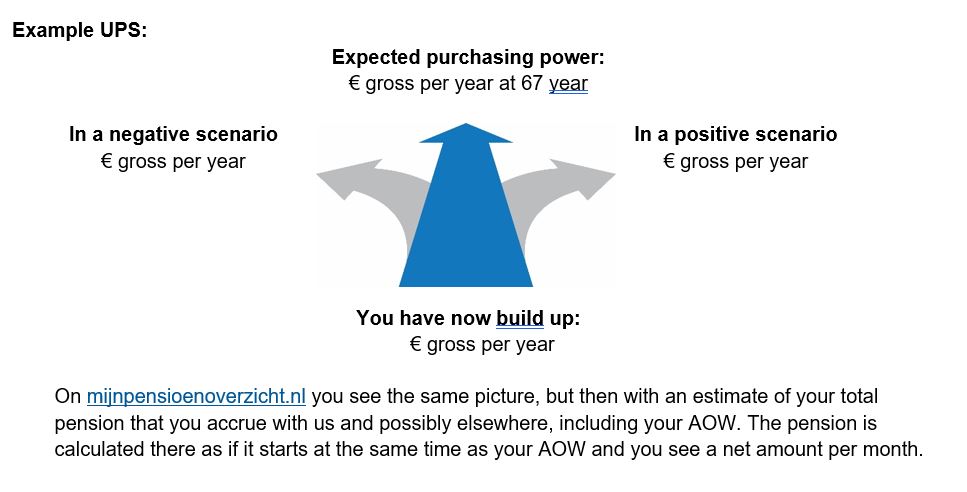 The upper amounts
You will see three amounts at the top. These amounts are an estimate of the pension you are likely to receive in various situations. An important assumption for all three amounts is that you continue to work until the PDN pension age, and you continue to accrue pension within the current pension scheme. If you stop working earlier, your pension will be lower.

What are the causes of a favorable or adverse result?

What is the difference between PDN’s UPS and Mijnpensioenoverzicht.nl?

The Uniform Pension Statement (UPS) gives you an estimate of the pension that you will receive from PDN. When you log onto mijnpensioenoverzicht.nl, you see an estimate based on your total pension, which also includes any other pension funds and your state pension.


Have you already retired?

If the expected end result is lower than the amount that you receive now, this means that economists are expecting the prices to increase and the purchasing power of your pension to fall. This does not mean that you will receive less, but you will not be able to purchase as much with the same pension. With the anticipated end result, you can calculate how much you will be able to purchase with your pension in ten years.


Why is this estimate different to the one from last year?

We need to adapt the rules we use to make estimates each year. We then take into account the financial situation at PDN at that time and the economic expectations in the future. That’s why the estimates change annually. Additionally, changes to the pension scheme may affect the estimates.


Are the scenarios a consequence of the pension agreement?

No, presenting scenarios is a new way of communicating about the pension that you are accruing via the current pension scheme.


I see new amounts. Has my pension scheme changed?
Yes, the scheme was changed in 2021. The accrual percentage for the retirement pension changed from 1.738% to 1.4% as of January 1, 2021; that percentage also applies in 2022. This change will have a negative impact on the pension you can expect to receive as of 2021. You are looking at an estimate based on the current scheme.

What should I do with my estimated pension amounts?

You can use the middle amount to estimate whether the expected pension is enough for your living expenses. The other two amounts indicate the direction in which your pension can develop if things go very well or very badly with the economy.

Your pension will never suddenly be equal to the amount on the left. If the economy takes a downturn for a longer period, the expected pension (the middle amount) will reduce gradually. It is therefore good to check your pension every now and then (for instance each year). You can then see the direction in which your pension is developing.


How likely is it that I will receive the lowest amount?

How likely is it that I will receive the highest amount?


What does 'if the economy does well' mean?

If the economy does well, it means that the economy is growing much better than expected. It is a possible future scenario in which the returns on investments are higher than expected. Interest rates increase and prices do not increase or might even fall. We do not know whether this situation will occur. But if this situation does occur, the right arrow shows what effect this will have on your pension.


What does an 'economic downturn' mean?


Is there a chance that I will receive less than the lowest amount? Or more than the highest amount?


Why is the surviving dependent's pension not shown if the economic developments are favorable or adverse?

The government has decided to only show what will happen to your own pension if the economic results are favorable or adverse.